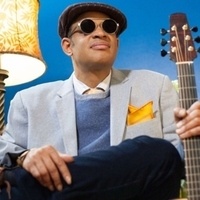 “Midón has a beautifully controlled baritone that can express anything from tenderness to passion. And the guy can play.” -The Guardian

Blind since birth, Grammy-nominated (Best Vocal Jazz Album for his past two Mack Avenue releases), Raul Midón displays borderless interpretations of his surroundings. Dubbed “an eclectic adventurist” by People magazine, he has collaborated with such heroes as Herbie Hancock, Stevie Wonder and Bill Withers, along with contributing to recordings by Queen Latifah, Snoop Dogg and the soundtrack to Spike Lee’s She Hate Me. Midón has earned acclaim the world over, with a fanbase that stretches from San Francisco to India, Amsterdam to Tokyo.