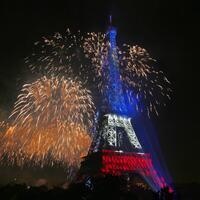 Bastille Day is a holiday celebrating the storming of the Bastille—a military fortress and prison—on July 14, 1789, in a violent uprising that helped usher in the French Revolution. The Bastille symbolized the callous tyranny of the French monarchy, especially King Louis XVI and his queen, Marie Antoinette.

Much like the Fourth of July in America, Bastille Day—known in France as la Fête nationale or le 14 juillet (14 July)—is a public holiday in France, celebrated by nationwide festivities including fireworks, parades and parties.  In one of the world’s oldest annual military parades, French troops have marched each year since Bastille Day of 1880 along the Champs-Elysées in Paris before French government officials and world leaders.

Tri-C's Western Campus will celebrate Bastille Day on Thursday, July 14, 12:30- 2:00 pm in the Lower Galleria.  Students will be able to enjoy traditional French crepes, compliments of Student Engagement and The Pantry.  Attendees will also be eligible to win crepe making supplies, to create this traditional dish at home- maybe even finding ingredients within the newly dedicated Pantry!

This event content is powered by Localist Event Calendar Software.