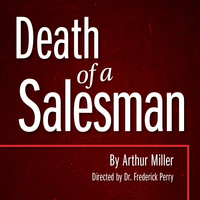 The play opens in 1949. Willy Loman is returning home from a failed sales trip, exhausted and cannot drive. At home is his dedicated and loving wife, Linda, and their two sons, Biff and Happy. Biff, the elder son, has returned home after a long absence involving some jail time. He’s a former high school football star who after seeing his father with another woman becomes lost and ruins his every chance of success through stealing. Happy, the younger brother, lives in the shadow of Biff and throughout most of his life he has been almost ignored by his father. He is a womanizer who has his own apartment where he entertains, but he mostly dreams of gaining success without the capacity to connect his dreams to reality. And, poor Willy lives with one foot in the present and the other in his memories.

Time is a monster for Willy. Through a series of flashbacks, we come to learn that Willy is not the magnificent husband and father that he has lead his family to believe. He was never a great salesman, and while away on his sales junkets he sees other women to whom he gives presents that he should have given to his wife. He lives a life of missed opportunities and regret, and because of this he is marginalized and truth be known–he is a failure. Willy’s life philosophy is “be liked and you will never want.” His sons follow in his footsteps, each believing in their father’s philosophy, yet fail in their own way.

Rife with unfulfilled dreams, Willy comes to the realization that his life is in shambles and with his life insurance policy in hand, realizes that he is worth more dead than alive.

There will be a matinee performance for students on Thursday, October 31st  at 10:30am.  For questions or reservations please contact, Cynthia Weaver at 216-987-4249 or  Cynthia.Weaver@tri-c.edu