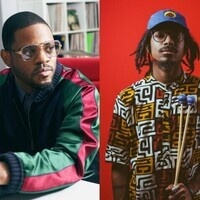 Drummer and 2020 Tri-C JazzFest Artist-in-Residence Karriem Riggins has often shifted between the jazz and hip-hop scenes, but the two genres are so inextricably linked that it would be better to call him a flexible multi-instrumentalist and producer. Born in Detroit, Riggins has recorded with the likes of Mulgrew Miller, Rodney Whitaker, Ray Brown and Roy Hargrove, to name a few. He performs regularly with Diana Krall and collaborates frequently with Common.

Performing first is Chicago-born, Brooklyn-based vibraphonist and composer Joel Ross, who has a way of being everywhere interesting at once: from deeply innovative albums to reliably revolutionary combos to the buzzing debut of Blue Note’s 2018 breakout star James Francies. Even with his own bands, Ross is basically a living blur of mallets, talent and ideas.