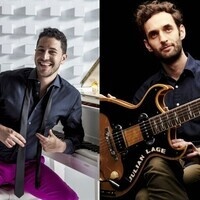 Headlining this Saturday performance is dynamic jazz pianist Emmet Cohen. Also a former child prodigy, he plays an extensive repertoire with the command of a seasoned veteran. Cohen was the 2019 recipient of the Cole Porter Fellowship (American Pianists Competition) and has performed with Christian McBride, Ron Carter and Benny Golson, to name a few.

Julian Lage is one of the most prodigious guitarists of his generation. A child prodigy, he was the subject of the documentary Jules at Eight. He performed at the Grammy Awards at 12 and joined the Stanford Jazz Workshop faculty at 15. Lage is known for transformative performances featuring impeccable technique and a spirit of infinite possibility.