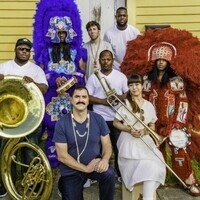 From the funk-laced beats and bass-heavy sousaphone blasts that kick off their Grammy-nominated album Spyboy to the gritty warmth of singer J’Wan Boudreaux’s voice, New Orleans brass band-meets-Mardi Gras Indian outfit Cha Wa radiates the fiery energy of the best features of the city’s street culture. “We wanted to take the roots of what we love about New Orleans brass band music and Mardi Gras Indian music and then voice it in our own way,” says Joe Gelini, the group’s drummer and founder.