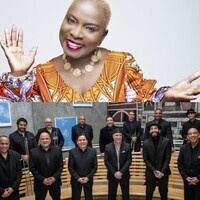 Four-time Grammy Award winner Angélique Kidjo is one of the greatest artists in world music today, a creative force with 13 albums to her name. Kidjo’s striking voice and charismatic stage presence cross-pollinate the West African traditions of her childhood with elements of R&B, funk and jazz, as well as European and Latin American influences. Expect the unexpected at this do-not-miss performance.

Performing first, two-time Grammy-winning salsa and Latin jazz band Spanish Harlem Orchestra (SHO) sets the gold standard for excellence in authentic, New York style hardcore salsa. Perfect for 2020, SHO is grounded in the past while focused on the future. They come at you full force with red-hot energy, blazing horns and musical precision that ignites audiences until the last note is played.